Blue Green Venus and the Stuff They Say

Ninety degrees. He has to mix and pour in daylight. Mixing by hand, buckets of tint, sakrete, stone, he starts the process he cannot stop, he lays the base of who she is.  He tints, he mixes, he fills the 50 pound buckets, he pours, he makes her real.
He has taken her apart, and put her back together on paper and in steel. He has changed her butt, her legs and twat, three times,  Like the nails, the water bringer, the thought, she is talking to him and  she has stuff to say. He is listening like he always does. The wood, the metal, the steel, the bronze, they tell him stuff, he tells them stuff,  most times they work it out, together.
Sometimes they tell him stuff before, sometimes after, it is easier before.

Blue Venus. She is, he thinks, blue and modest, it is what he saw in that place where he sees.


He mixes and blue-tints, carries and pours, then leaves her to become what she is.


Turns out she had stuff to say, after.


She is not blue, she is not modest, she is green and full of attitude.
He knows that when he grinds, polishes and lacquers she will have the final say. 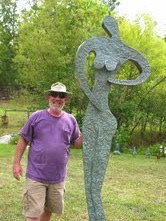 Posted by Lucie Pollard Branham at 7:33 AM